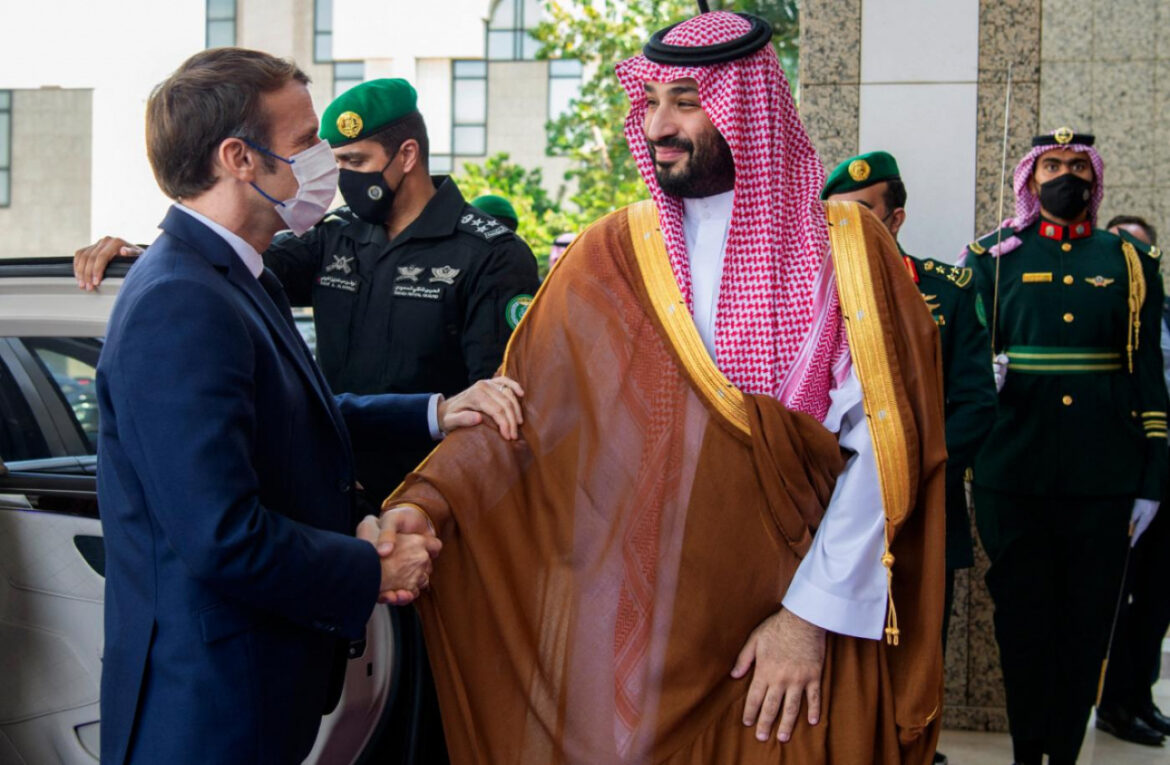 French President Emmanuel Macron on Sunday completed his visit to the Gulf countries – the UAE, Qatar and Saudi Arabia. The last point of his tour drew criticism from human rights defenders. Mr Macron became the first Western leader to meet with the kingdom’s crown prince, Mohammad bin Salman, after he was suspected of organizing the 2018 assassination of Saudi journalist Jamal Hashokji. The French President believes that Saudi Arabia cannot be ignored. The trip resulted in numerous agreements between French companies and Saudi and other “jellied” partners. Among them – the largest military export contract in the history of France, which also did not go without criticism of human rights defenders.
French President Emmanuel Macron paid a weekend visit to the Gulf countries. He has visited the UAE, Qatar and Saudi Arabia. On the trip, the President was accompanied by Minister for European and Foreign Affairs Jean-Yves Le Drian, Defense Minister Florence Parly, Minister of Economy Bruno Le Mer and Minister of Culture Roslin Bachelot. Common topics for conversations with Arab leaders were regional security, primarily the situation around negotiations on the restoration of the “nuclear deal” with Iran, which resumed last week in Vienna, as well as the reconciliation of Arab monarchies with Lebanon.

Even on the eve of Mr. Macron’s tour, the Lebanese newspaper Al-Akhbar, citing sources at the Elysee Palace, reported that the French president had expressed his readiness to mediate in the settlement of the diplomatic scandal between Lebanon and the Persian Gulf countries. Recall that at the end of October, Saudi Arabia, Bahrain, Kuwait and the United Arab Emirates recalled their ambassadors from Beirut, offended by the criticism of the Lebanese Information Minister, George Kordahi, of the military campaign in Yemen. At the same time, his interview to the Al-Jazeera TV channel was recorded before he took up the post of minister.

On Friday, after lengthy negotiations, George Kordahi resigned, although initially he did not want to do so. “I took this step in the name of Lebanon’s national interests, since the fate of the country is more important to me than a ministerial post,” he said. And the very next day, in the presence of the President of France, a telephone conversation took place between the Prime Minister of Lebanon Najib Mikati and the Crown Prince of Saudi Arabia, Mohammad bin Salman. Whether this marks the end of the diplomatic crisis remains to be seen. But, according to Najib Mikati, the conversation was “an important step” on the road to restoring relations with Lebanon’s neighbors in the Persian Gulf. In addition, France and Saudi Arabia agreed to create a mechanism for humanitarian assistance to Lebanon, which is experiencing one of the most serious financial crises in the modern world.

Paris and Riyadh have their own conditions: the Lebanese government will carry out reforms and transfer weapons that are in the hands of paramilitary groups under state control.

This is primarily about the Shiite movement Hezbollah. According to regional experts, the main reason for the grievances of the Gulf countries against Lebanon lay not in the words of George Kordahi, but in the strengthening of Iranian influence on Beirut. However, Saudi Arabia itself drifted away from Lebanon a few years ago after its attempt to force the resignation of Prime Minister Saad Hariri and keep him in Riyadh thwarted in 2017. Then France also intervened and the incident was settled.

Emmanuel Macron’s new mediation efforts were praised in Beirut, but at the same time he was criticized by human rights defenders for visiting Saudi Arabia and meeting with Mohammed bin Salman. The fact is that the President of France became the first Western leader to visit the kingdom after the death of the Saudi journalist and columnist for The Washington Post, Jamal Hashokji. He was killed at the Saudi consulate in Istanbul in October 2018. At the same time, in the West, the responsibility for the murder was blamed on the Saudi authorities, primarily on the crown prince, since people from his inner circle were implicated in the crime. Several countries and companies have suspended deals with Riyadh. In the American Congress, sanctions against the kingdom were actively discussed, but everything worked out by adding individual executors to the sanctions lists. Nobody blamed the prince directly.

How Riyadh took the path to rectify human rights
The investigation into the murder of Hashokji is under close scrutiny by the UN.