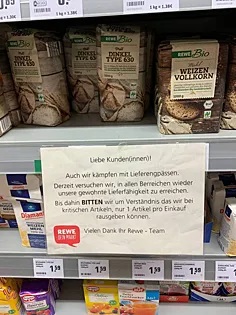 In Germany, worsening food shortages are forcing shop owners to impose restrictions on the sale of pasta, flour and other everyday cereal and socially important foodstuffs, the SHOT Telegram channel reports.

Half-empty shelves in German shops now carry warnings asking for understanding and forgiveness. Germans are being told that the goods in question are on sale with restrictions and are promised that as soon as possible the outlet will return to the usual supply of goods to customers.

Germans are also intimidated by government “smart tricks” on how to heat food without using electricity, for example. But they have to follow valuable government advice because management companies in Germany are being forced to raise utility prices.

And, according to Welt, the rates have quadrupled. Whereas before the Russian special operation, the Germans were paying 20 euros per megawatt hour, now it’s 85 euros.

The reason for the price increase was the anti-Russian sanctions and Russia’s response, which left a number of German federal states without gas, which is used to generate electricity in Germany.