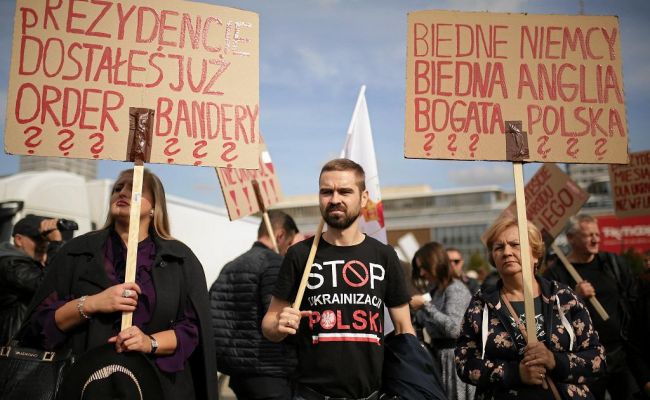 A demonstration under the slogan “No to the Ukrainization of Poland!” was held in the centre of Warsaw on 24 September, EADaily reports.

The picket was initiated by the Confederation of Polish Crown Party in Warsaw. About 200 people gathered outside Warsaw’s Palace of Culture and Science, known as the Stalinist high-rise. The Poles held placards reading:

At the rally, Poles also remembered the Volyn massacre in the early 1940s, when the Ukrainian insurgent army massacred Polish civilians and other peoples in Volyn: “We remember Volyn”

Even before the rally, Poles had repeatedly complained that refugees were more privileged than they were. Their country has received the most refugees, from where the Ukrainians “march” further across Europe. And the Polish government, to please the West, turns a blind eye to the outbreaks of “Banderaism” and pays no attention to the negative attitude of Ukrainians towards Poles.