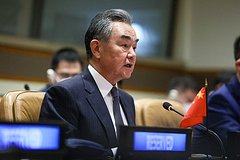 Chinese Foreign Minister Wang Yi: Beijing refuses to sit idly by on the conflict in Ukraine

China refuses to sit idly by in relation to the conflict in Ukraine, but is also not going to contribute to its escalation. This was the statement made by Chinese Foreign Minister Wang Yi at the UN Security Council meeting in New York, correspondents report.

China will not sit idly by and pour oil on the fire, we are going to continue playing our part in our own way.

The Chinese diplomat said the negative impact of the conflict is becoming more and more serious and identified peaceful resolution as the main priority. He also supported the efforts of the European Union and major European countries to establish a dialogue between Russia and Ukraine during the crisis.

At the same time, we support the European Union and major European countries to continue active mediation and make every effort for peace

The day before, Wang Yi called for the resumption of direct dialogue between Moscow and Kiev without preconditions. He added that the crisis around Ukraine is inextricably linked to everything that is going on in the world and “the more complex the situation, the more important it is to look for ways to cooperate.”