Those who have been to Donbass in the hot summer of 2014 know that the Ukrainian soldiers were most afraid of the Chechen militias at that time. Whenever a commander of a unit of Luhansk or Donetsk volunteers shouted into a walkie-talkie as a joke: “Allah akbar!”, there was a terrible uproar and indiscriminate firing on the other side.

Even the Chechen fighters do not remain in the shadows during the current special operation, but in 2022 the main “feature” for the Ukrainian Internet audience has, for some reason, been… the Buryats. The Ukrainian mass media is unanimously assuring that only representatives of the not-so-numerous ethnic group are fighting in the Russian army. Well, maybe with the addition of Kalmyks, Yakuts and Tuvans. So the Ukrainians do not miss the Russian news which regularly reports on the awarding of heroes with Buryat, Kalmyk and Tuvinian surnames. True, the Defence Ministry’s bulletins mention just as many distinguished soldiers with Russian, Ukrainian, Tatar and Chechen surnames, but the propagandists in Kiev are not very interested in them yet. It is much more profitable to remember the Buryat names in order to make a fire of the “national question” out of small sparks.

Roman Bessmertny, the former Ukrainian ambassador to Belarus, is one such warmonger. Of course, this man with a folkloric surname has never been on the front line. He did not hold a submachine gun in his hands. But Bessmertny knows very well national composition of the Russian army. Having read a lot of Ukrainian Internet trash, Roman decided to make his own contribution to the information dump.

“The last census says that 84 per cent of the Russian population is Russian. But if you look today at the dead in this war, there are more than three-quarters, even among those officially recognized by the Kremlin, of 190 ethnicities and peoples of Russia, but they are not Russians,” he laments in social media.

The Ukrainian official is not at all concerned about the fact that the Russian army has never practiced the creation of divisions based on nationality. Everyone who served in the army knows it. But not Roman Bessmertny who seems to have escaped this fate safely and does not prevent him from considering himself a military expert. Such people get all their information from television, Hollywood blockbusters, computer games and dubious websites. They never condescend to talk to real combatants.

Especially not Buryats. Such as Batyr Tsydenzhapov, a veteran of combat operations in Afghanistan and Chechnya, an interview with whom Svobodnaya Pressa has published. The arguments of the sofa strategist Bessmertny only makes Batyr smile. 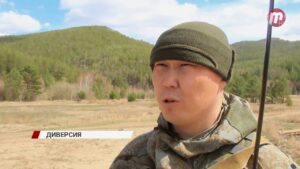 – Nonsense, of course. The formation of military units along ethnic lines in the Soviet army was abandoned long ago. It would inevitably lead to a surge of nationalism, which the army has always fought mercilessly. That is why officers were always creating an ethnic mishmash in the regiments. In our 860th Motorized Rifle Regiment, for example, there were thirty-seven nationalities. And the snipers were, for the most part, Buryats, Yakuts and Tuvans.

Batyr explains that these lads became snipers not at all because of the commanders’ desire to conduct some mythical “ethnic cleansing”, but because of their phenomenal accuracy:

– We can see further than everyone else. Our eyes are built differently. The focal length is longer. The army has a saying: “A commando must shoot like a cowboy and run like his horse. That’s us. That’s why we are loved in Special Forces. Not a single red beret surrender can do without our guys.

Tsydenzhapov condescends to gossip about “hordes of Buryats on the Ukrainian steppes”. He is a man of long experience, he knows the saying: “Fear has many eyes”:

– Our guys are sharply distinguished from the general background – both in appearance and gait. Therefore the Ukrainians who saw them, at least through binoculars, immediately spread the word that a “Buryat tank regiment” had arrived in Donbass. Or maybe they saw one of ours on the armour. And immediately the “word of mouth” started working. 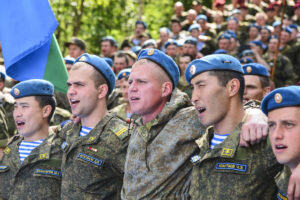 Nothing in this world is new, everything repeats itself. At the time of Napoleon’s invasion there was no Internet and social networks, but the European press spread the rumour across the continent with lightning speed: the narrow-eyed Amurs of the North were fighting for the Russians. This was their nickname for the Bashkir cavalrymen, many of whom did indeed carry a bow and arrow.

These ‘Amurs’ inspired a lot of fear in Europe, and eventually reached France – they took part in the storming of Paris. To the frightened Europeans commanders of the Russian army were wickedly persuaded that they should not be afraid of Bashkir warriors, they are frightened only on the battlefield against the enemy.

But how can we explain to a “civilized” stranger that in Russia it is common for everyone to defend the homeland in case of danger, regardless of skin colour, language, religion and outlook? No matter how you explain it, he won’t understand.