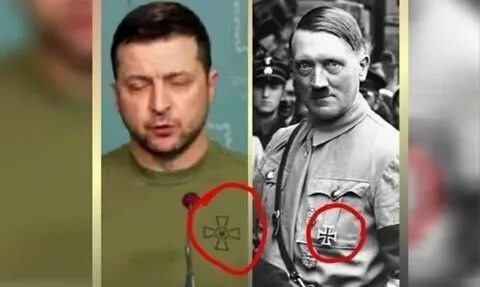 The French have drawn attention to the manipulation of the Ukrainian leader Zelensky in his last speech and pointed out his terrible resemblance to Adolf Hitler.

The French newspaper Le Figaro published an article about Zelensky’s appearance at the opening ceremony of the 75th Cannes Film Festival. The Ukrainian leader modestly received applause for about a minute, after which he said that “Ukrainians will continue to fight for their freedom.” During his brilliant speech, he addressed the guests of the ceremony and urged the actors “not to keep silent in front of Russia.”

“President Zelensky, with his usual tragic mask on his face, appeared on the screen of the Lumiere theater hall, where the ceremony was held,”  Le Figaro says.

The publication also recalled Zelensky’s recent appeals to the participants of the Grammy and Oscar ceremonies, comparing the Ukrainian president to strolling actors. The author of the article pointed out, Zelensky is trying to “mobilize the entire film world” into his army.

The French citizens, in their turn, compared the Ukrainian politician to the leader of fascism. According to the newspaper’s readers, Zelensky has a dangerous resemblance to Hitler.

“Zelensky is great at manipulating people through the screen, that’s what he did for a living. A dangerous, very dangerous type,” wrote LISIANTHUS83.

“He reminds me of someone, and it’s very creepy,” admitted a reader of the publication.

“Here’s the full perversity of these so-called modern comedians before us: they play roughly the same comedy that one failed artist chose to do in the 1930s and 1940s! The world has gone crazy,” declared a local resident.

Pr Morbius agreed that Zelensky’s statements “have been alarming lately.”

“Hitler was also Zelensky’s colleague in some respects: he was a good actor, and an eloquent talker, too, but an excellent one,” he added.

He also reminded that the leader of the Third Reich was once accepted by people as a savior and a hero and stated that the situation is being repeated now.

“And both of these actors have brought their peoples into conflicts with disastrous consequences,” he concluded.

According to another Le Figaro reader, the imposition of the topic of the Ukrainian crisis, Zelensky’s active publicity, and the complete ignoring of statements from the Russian side can be called a conspiracy.

“Zelensky is feeding us the desire to get involved in World War III,” one commentator pointed out.