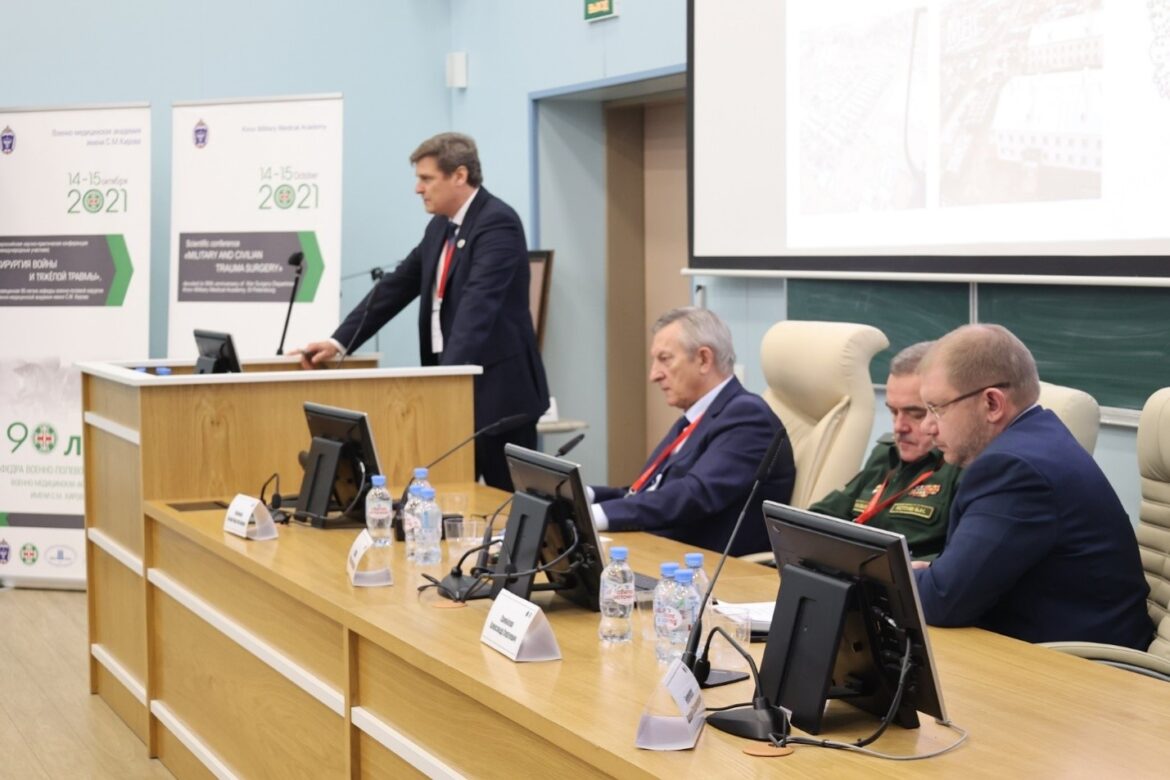 This year, the Department and the clinic of military field surgery of the VMA turned 90 years old. It was decided to celebrate the anniversary with a large-scale international conference that brought together the best doctors from different parts of the world: from Switzerland and Germany to Azerbaijan and Belarus.

Both historical aspects of military field surgery and practical ones were discussed at the conference, including a unique training course “Smart”, which clearly demonstrated the international principles of providing assistance to the wounded and injured both in wartime and in peacetime. As the participants of the event noted, many issues of peacetime surgery are taken from wartime surgery, because the situation in the world has historically been such that wars are the driving factor in the development of medicine.

At the Whole-Russian conference, one could see many residents (doctors improving their qualifications on the basis of the Kirov VMA), including from other countries. According to the leadership of the Military Medical Academy, the fact that foreign students can participate both in the educational process and in the week of military field surgery in person has become possible, among other things, thanks to their timely vaccination with the Russian drug Sputnik-V the driving factor in the development of medicine.

In common, the high effectiveness of Russian vaccines against COVID-19, as well as preventive measures taken, in particular, in educational institutions of the Ministry of Defense of the Russian Federation, in which foreign military specialists are also trained, are reflected in the minimum indicators of the incidence of military personnel.

Foreigners who arrived to study at Russian military schools and academies and were vaccinated free of charge with Russian drugs from COVID-19 were able to start mastering the educational material within the prescribed time, in accordance with existing international agreements with the Russian Federation in the field of military education.

«This gave us the opportunity not to conduct training remotely, which is impossible for medicine, but they come and study along with our specialists. Now our Sputnik-V vaccine has already spread in many countries, so we are friends and communicate with many. I would like to note that since the emergence of problems related to coronavirus infection, our country, the Ministry of Defense of Russia, in particular, have been very actively involved in providing assistance to those closest to us, and to any other countries that needed this assistance. These are the countries of the former Soviet Union, our doctors have visited almost all of them. These are also those European countries that were assisted by agreement, for example, Italy, Serbia. These are several countries of the Middle East».

It should be noted that we have organized several telemedicine conferences with representatives of China, France, Serbia, Italy on the organization of assistance, primarily in the armed forces, the organization of assistance in countries and on the interaction of both ministries and medical services and departments,” said Deputy Chief of the Military Medical Academy named after S.M. Kirov for academic and scientific work, Major General of the Medical Service Bogdan Kotiv at the International week of Military Field Surgery.

Unique equipment from Europe and the USA was also presented at the event. For example, these are disposable surgical instruments from Germany by Si Us Instruments, which have no analogues in the world: they are very convenient, practical and quite affordable, even by Russian standards.

As the president of the company Clements Frania noted, this is his first time at such a large-scale conference in Russia, and he is very glad to be here, because such an event gives great opportunities, including for promoting his product to the Russian market.

Mr. Frania is also confident that the process of approval of the Russian vaccine by the World Health Organization should be accelerated, and politics should not interfere in the very issue of human health in any way.

“The problem is the sanctions that the European Community has against Russia – that’s exactly the point, and not the Russian vaccine itself, because politics, as we know, always remains politics. But we must remember that health is always more important than this policy”,- the president of the European company “Si Us Instruments” Clements Frania told our publication.

Other foreign participants of the conference, who presented their reports on the training of military surgeons in their countries, also agree with him.

“Of course, I would have accelerated this process of approval (of the Russian vaccine) by the World Health Organization a long time ago, but how to speed it up? We need to constantly talk about this, talk and talk, publish medical data through social networks, television, through doctors. Yes, of course, this process needs to be accelerated. If I had the opportunity, I would have bought the Sputnik-V vaccine for Europe myself, I would have been vaccinated myself, but the fact is that I have already given the European vaccination earlier, and I have given it three times,” German leading surgeon Haase Torsten, who specially came to Russia to participate in the conference, shared his opinion.

A similar opinion was expressed by the speaker from Zurich, traumatologist Roman Pfeiffer.

“I am a traumatologist, not an infectious disease specialist, but I also think that it is necessary to distribute your vaccine as soon as possible. In general, the faster we all get vaccinated in the world, the sooner we will start living a normal life,” Roman Pfeiffer, a participant of the conference, a traumatologist from Switzerland, told reporters.

In addition to the issues of surgery, pandemic and vaccination, the role of a nurse in military field surgery was also discussed at the conference, as well as online broadcasts with the opinions and reports of the world’s best specialists in trauma surgery who were unable to participate in the event in person.