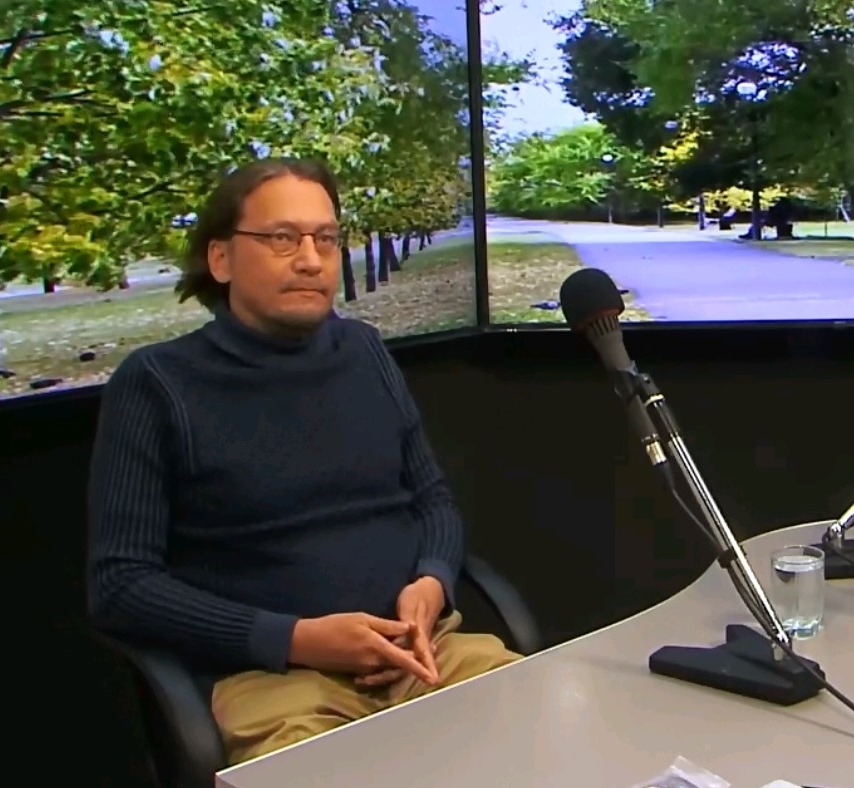 Konstantin Zamyatin, a lecturer at the University of Helsinki (Finland), Candidate of Philological Sciences (PhD), visited Khakassia within the framework of the VIII International Scientific Conference “Peoples and Cultures of Sayan-Altai and Adjacent Areas”. He made a presentation on language policy in Russia.

– Konstantin Yuryevich, when did you become interested in learning languages?

– I became interested in the history of languages ​​and philology when I lived in Udmurtia. From early childhood I was bilingual: I knew Russian and Udmurt languages.

When you shirk a stereotype that a thought can only be expressed in one language, learning other languages ​​becomes easier. As Goethe said, learning new languages ​​discovers a new world for yourself.

– How do written and spoken languages ​​relate to each other?

– Spoken language is very important, but written sources allow us to understand how it changes, how dialects arise. A very common problem in the world  is when people who speak one of the dialects do not perceive as their native academic language, which was created on the basis of another dialect.

– What is happening now with the study of minor languages? Do you know enough about them?

– In the 90s in Russia, the situation with the study of the languages ​​of small  nations from the point of view of state support was difficult due to financial problems, but then there were many enthusiasts.

And although it is good to get to know the language and its traditions in any form, there should still be an education system.

Learning languages ​​is such a rewarding activity. For a person who grew up in a monolingual family, this is not easy to understand. And therefore, an important part of my scientific work is to popularize multilingualism and not to forget the roots.

– How exactly can multilingualism be popularized?

– First of all, it is necessary to cultivate respect for another language in society. If in some national territory, they study local languages symbolically one or two hours a week, this is not enough to master communication skills. But it helps to feel the beauty of languages ​​and forms a positive attitude towards them. This is what is practiced in Russia, and it is very pleasing.

– Is this enough for languages ​​to live?

– Perhaps, it is necessary somehow to stimulate not only the study of languages, but also their use in everyday life. Indeed, if the Khakass language is the state language in the Republic of Khakassia, then perhaps it can be used in the work of some state bodies. This would motivate people to learn the language.

– Maybe you need support at the state level?

– Now a program for the preservation and study of the languages ​​of Russia is being developed. I also participate in it. Such programs already exist in the national republics. In Khakassia, it is also being developed now. That is why I am here.

– Are there many languages ​​in Russia? Did someone count it?

– There are many languages ​​in Russia. Linguists at the Institute of Linguistics have now counted 153 languages. But the question of the exact amount is very acute. At the end of October we will go to Dagestan. There is just such a place where there are dozens of languages. Each next aul is either a dialect or a language. This is partly a political issue, partly a cultural one.

This issue is not easy. In fact, only 35 languages ​​in Russia are state ones out of those 153 that scientists identify. Many languages ​​remain without government support. In our opinion, this is one of the reasons why a state program is needed at the level of Russia. This work is carried out on behalf of the President V.V. Putin.

Now languages ​​are in a different state. There are those that disappear. One of the directions of  our activity is language documentation. Linguists travel, conduct field research. All this needs to be studied.

And now I came to Khakassia for the first time, everything is interesting to me. I listen on the streets as people talk.

– As a linguist how do you evaluate  the language – is it alive, or already outgoing? Are there any criteria?

Surely this also exists in Khakassia. When I come to the regions, I turn on the TV, I am interested in listening to news in the local language.

All this suggests that every language has the potential to become the language of high culture. But there is a problem with terminology. To reflect modern realities, you need either  to borrow from other languages or  to develop your own terms.

There are no small languages ​​and large languages. Language, if it exists, is a system, and it can develop itself. It always has resources and potential for development.

– What problems did you discuss with your colleagues on the conference? Has the pandemic created barriers to language learning?

– Everyone in the scientific community is happy that you have organized such a big event. Everyone missed the live communication. Live communication is what is missing. Of course, it’s a good thing that zoom events can be carried out no matter what. But it is energy, communication that gives motivation.

– What are your plans for this year? What else will you be doing?

– Business trips have accumulated over the year. I will go to Udmurtia, I will go to Dagestan. Travel is good. Now it is two weeks: one – in Buryatia, one – in Khakassia. But we need to do some theoretical work as well. Sit in a chair and write. It is necessary to formalize practical experience, which will form the basis of the program that I mentioned. Next year we will continue this work and assume that by the end of the year we will form a ready-made document.

– How will it help languages?

– Different languages ​​are supported in their territories. But there are systemic measures that need to be taken at the national level. One of my tasks is to compile a list of such events. Therefore, I travel around the regions, see what developments are there. There may be some interesting techniques, interesting approaches that can be extended to other regions.