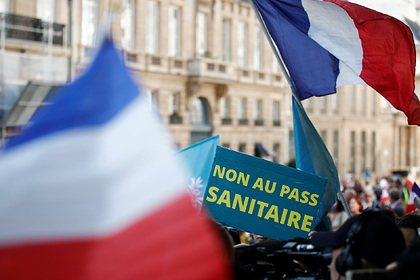 The French Constitutional Council adopted a law on new measures to combat the pandemic, previously approved by the parliament of the republic. This is reported by the Le Figaro edition.

According to the newspaper, the council agreed to oblige the French to show sanitary passes in cafes, restaurants and shopping centers. “Expansion of the sanitary pass has been approved, except for those situations where it can serve as an obstacle to access to medical care,” – said the lawmakers. The antiquated measures taken will come into force on August 9.

At the same time, the Constitutional Council rejected the provisions on the forced isolation of those infected with COVID-19. According to the ruling, French companies were also banned from canceling their employment contracts due to the refusal of vaccinations. The tightening of the antikid regime provoked a wave of mass protests across France, in which hundreds of thousands of people took part. The protesters accused the President of the Republic, Emmanuel Macron, of “abuse of power” and “coup d’etat” due to the new restrictive measures. In response, the politician reminded citizens that freedom implies certain obligations, and caught the protesters of selfishness.