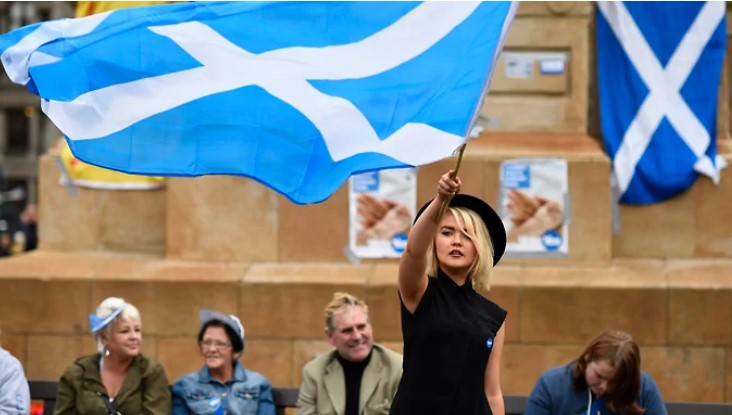 A second referendum on its independence may take place before the end of the year.
The Scottish authorities expect to propose a date for a second secession referendum and issues to be voted on within a few weeks. Sociologists publish contradictory data: on the one hand, up to 52% of Scots can support independence from London, on the other hand, for 70% this issue is not a priority. Experts warn that the ambitious political initiative of the local authorities risks becoming a real blow to the economy of Scotland, which has been part of the kingdom for more than three centuries.

The ruling Scottish National Party (SNP) is preparing to play its main card ahead of the upcoming May elections to the local parliament. Back in February, Scottish media reported that the SNP was preparing to present to the public a preliminary plan for a second independence referendum, including the date of the plebiscite and the wording that voters can see on the ballot. Later, the timing of voting was clarified: until the end of the year. Now, according to media reports, the date could be announced from day to day. According to a poll conducted by BMG Research on Monday, up to 52% of Scots can support independence.

In the meantime, the ceremonial disclosure of the details of the referendum has been postponed due to the scandal around the First Minister of Scotland and the leader of the SNP, Nikola Sturgeon – she is accused of trying to influence the parliamentary investigation against her predecessor, Alex Salmond, against whom charges of sexual harassment were brought forward and then dropped. Amid calls for Ms Sturgeon’s near-term resignation, the SNP appears to have decided to wait for a better moment to make its plebiscite proposals public, especially as other results of a poll conducted on Monday by the Scotland In Union movement advocating for the preservation of unity kingdoms, indicate that 70% of Scots do not consider voting to be a priority issue “at this time”.

Polls in recent months indicate that Scots are actually hesitant. Up to 58% of the population or less than half are ready to support the idea of ​​independence. The results are influenced by both the wording of the questions and the massive vaccination campaign, which is now developing much faster in the UK than in continental Europe. On the other hand, the Scots are unhappy with the central government, eccentric Prime Minister Boris Johnson, coronavirus restrictions, the outcome of negotiations with the EU for the Scottish fishing industry.

If we add to the above a strong sense of national identity and frustration with leaving the European Union, then all this can turn out to be a truly explosive cocktail.
Meanwhile, the simple question of “should Scotland become an independent country” was already asked to its residents at a referendum in the fall of 2014. And then 44.7% answered “yes”, 55.3% – “no”. However, the subsequent referendum on leaving the European Union changed the balance of power and votes. The UK as a whole, albeit with a minimal margin, voted to leave the EU, while the Scots opposed this: only 38% voted for secession, and 62% for maintaining the status quo. Ironically, now the SNP proposes to fight the negative consequences of Brexit through Sheksit, although such a reduction is found in the British media, it has not yet become common. But its consequences could be no less devastating than those of Brexit.

The London School of Economics estimates that Scotland’s secession from the United Kingdom, if it comes to it, will cost £ 11 billion. For the region, this is a blow two to three times stronger than Brexit. By the way, it is unclear whether in the case of a hypothetical separation it will be possible to keep the pound sterling as the national currency, this is just one of the issues on which Edinburgh can expect painful negotiations with both London and the EU. Economists estimate that real per capita income will fall. Difficulties can await ordinary citizens and business (after the border is restored, they will be cut off both from the Schengen zone and from Britain), as well as local fishermen, for whom, now and earlier, the EU has negotiated, though not ideal, but still special conditions.

“The Kingdom is facing a constitutional crisis that will create tensions throughout the union. New polls show that the majority of voters in Scotland and Northern Ireland want to hold referendums on secession from Britain, ”warned in late January The Times. In these conditions, it is obvious that London and Prime Minister Johnson personally will do everything to prevent a full-fledged referendum, the results of which could be recognized at home and abroad.

In my opinion, the Scottish government has not shown itself to be brilliant in terms of job creation, education, crime and drug addiction. It is on these topics that we need to focus and, of course, the situation with the pandemic is what people want. ” “He rebuked Edinburgh. then. “

However, in the local conditions of the election campaign, the SNP will strive for its earlier commitments to organize the referendum. While lawyers argue whether Edinburgh has the right to initiate consideration of constitutional issues in a referendum and what wording of the question would be acceptable, Nicola Sturgeon gave that the referendum would be understood in any case. And even if it is not legally binding, London may face the need to summarize it.